The children explored ordering numbers practically today, they put themselves in order and explained how they know using our key vocabulary (greater, more, fewer). We practised this from smallest to greatest and then greatest to smallest. The children used number tracks to support them. They also worked with their partner to put dominoes in order from smallest to greatest and then had a go in their books.

Penguin Class were able to visit our local library! They had a great time looking at the books available and they were able to borrow one book each to take home to share with their parents. They had a small activity too, where they voted for their favourite type of book. We look forward to our next visit.

The children have been introduced to the greater than >, less than < and = equal symbols. They have used this vocabulary to compare numbers and began to make the symbols to compare them too. We used cubes to show which are greater and how it effects the way the symbol will go.

Fewer, Most or Same

The children have been using the vocabulary fewer, most or same. They know that fewer means the smaller amount. They played a game using cubes and dice to see who gets the most. We then practised this in books. 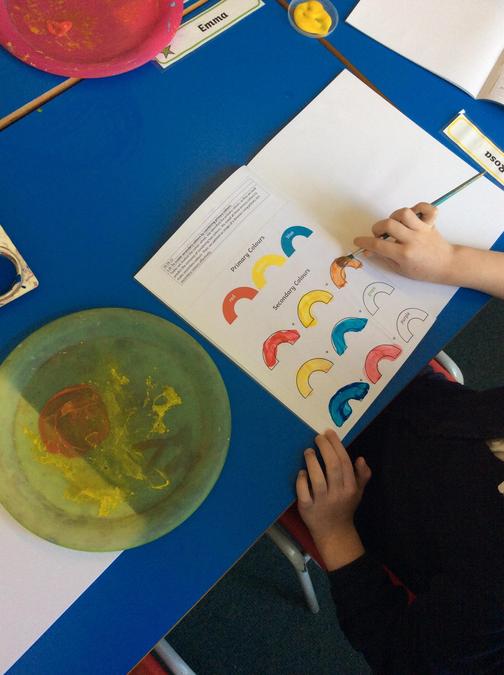 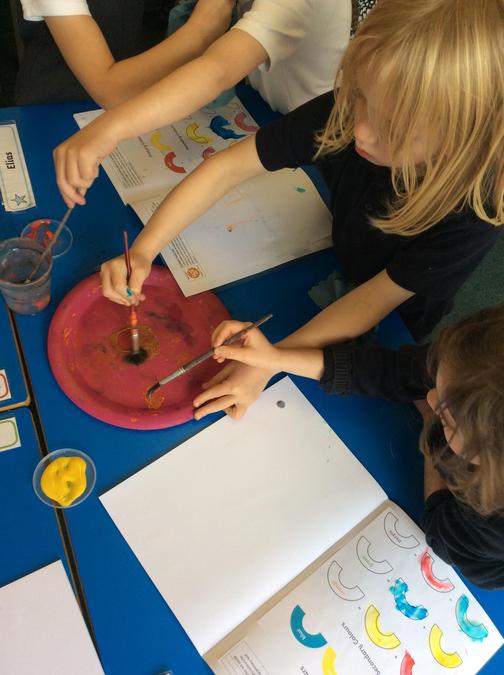 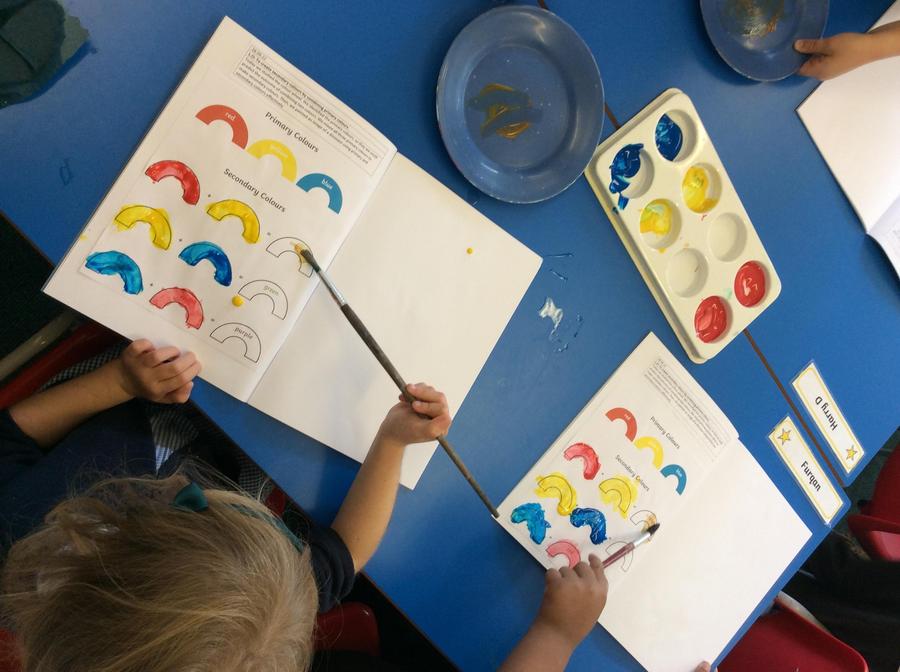 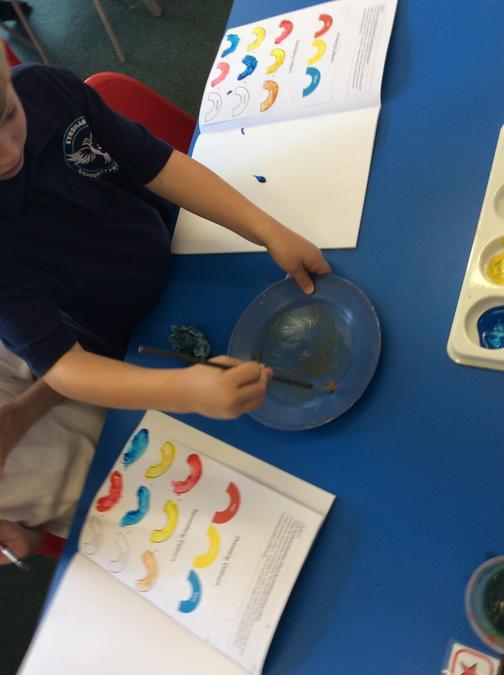 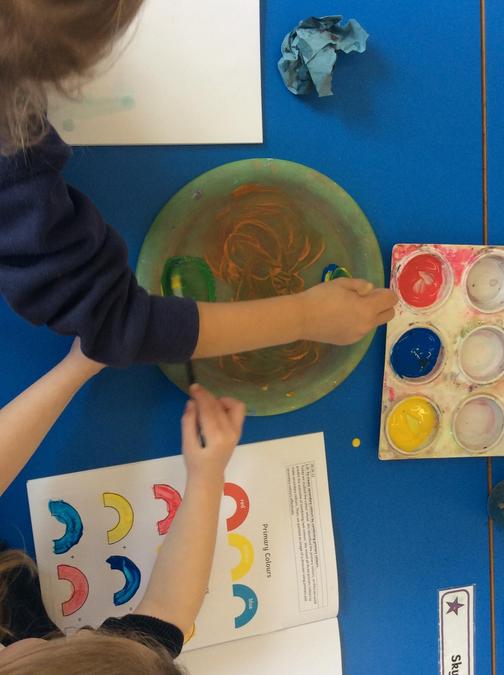 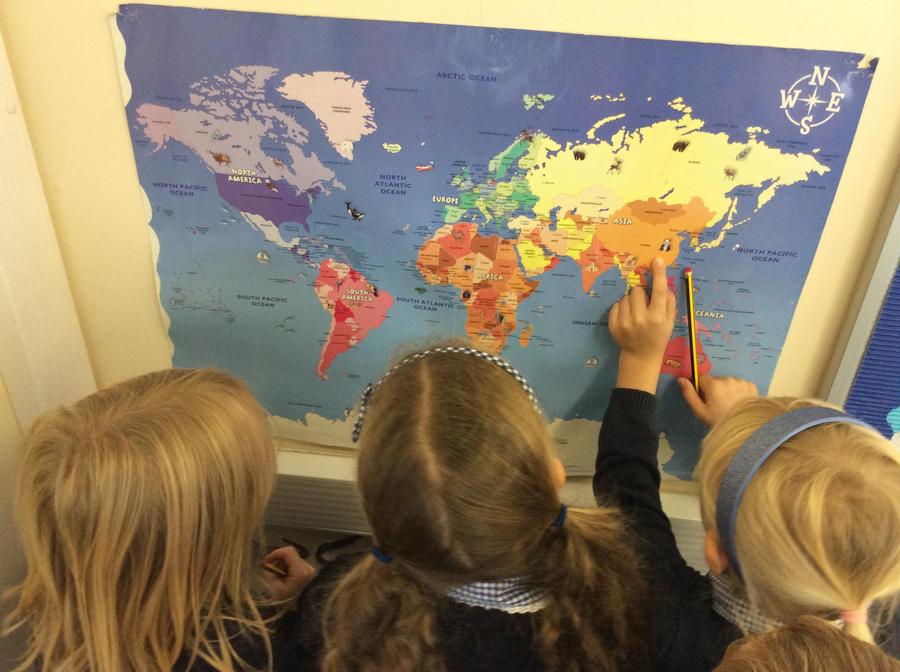 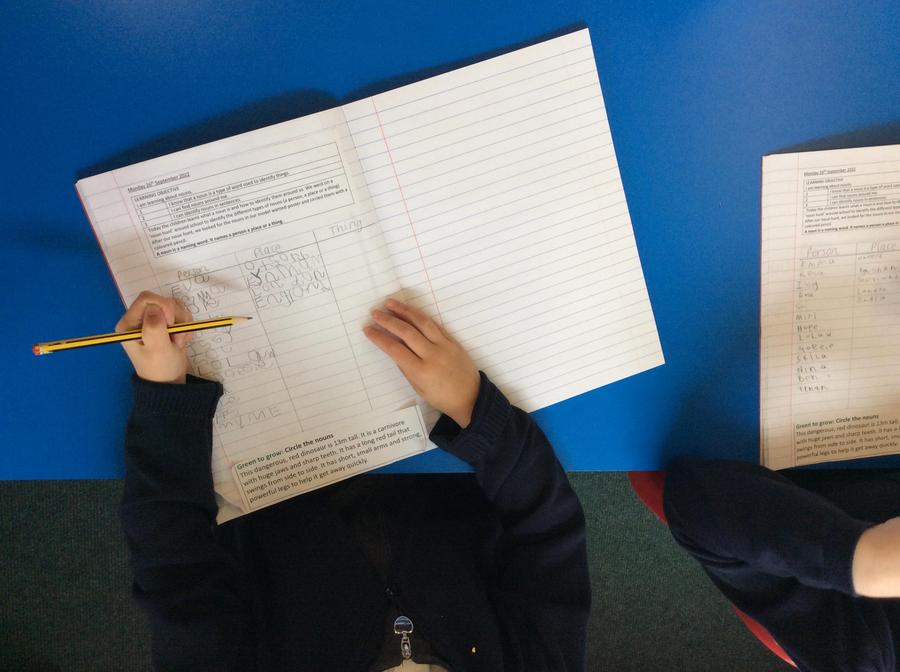 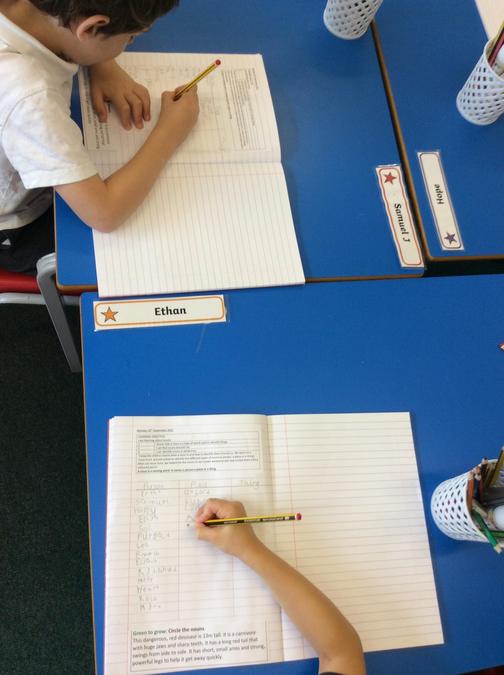 Today the children learnt what a noun is and how to identify them around us. We went on a ‘noun hunt’ around school to identify the different types of nouns (a person, a place or a thing). After our noun hunt, we looked for the nouns in our model wanted poster and circled them with a coloured pencil.

A noun is a naming word. It names a person a place or a thing.

We have carried on learning about materials in science. We sorted objects into the materials they are made from and can explain the difference. We have also been describing their properties e.g. metal is hard and shiny.

The Year 1 children are going to learn how to write descriptive sentences about dinosaurs so that we can create wanted posters to put up around the school and village to keep everyone safe.

If you see the T-Rex wandering around Eynsham please contact us!

The children have been practicing their counting backwards using number tracks to help them. We ‘blasted off’ when we got to zero. The children then ordered their set of Numicon to go backwards, starting at 10. They challenged their partner to say what comes before a given number. We practiced counting back from a given number and discussed if we would say certain numbers and explained how we know.

The children explored the outside and the marsh to find natural objects to make a creation. We discussed how it feels to create something and how we would want it to be treated. We talked about if someone did something to destroy their creation, they would feel sad or angry. This is how Christians believe God feels when we don’t treat his creation – the world – with respect.

The children had a brilliant day exploring different dinosaur related activities. We had archaeologists discovery bones, making and creating the species of dinosaurs in different ways, learning facts and drawing environments a dinosaur could live. Thank you and well done for the effort in the costumes, it was great to see the enthusiasm and enjoyment the children had today.

Today the children shared all their previous knowledge about dinosaurs. For many of us, this was naming dinosaurs and describing their movements and size. E.g. A Pterodactyl could fly. A T-Rex was the biggest dinosaur. Some of us began to describe what different dinosaurs ate too. After we played a game, we practised identifying them quickly and learnt how to say the tricky names correctly. We learnt a song to help us with this. 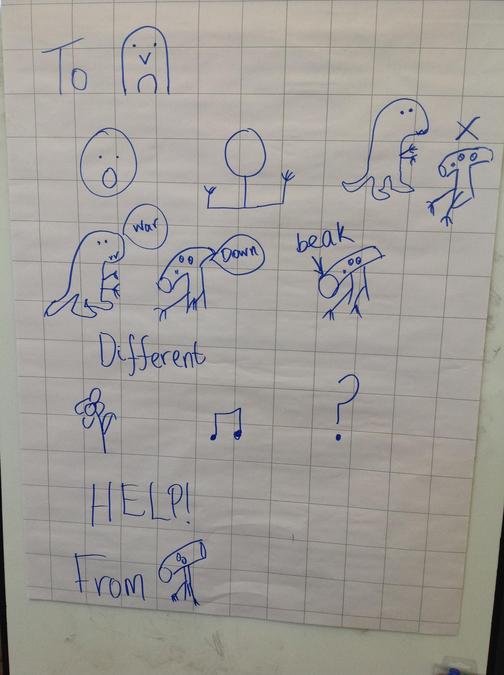 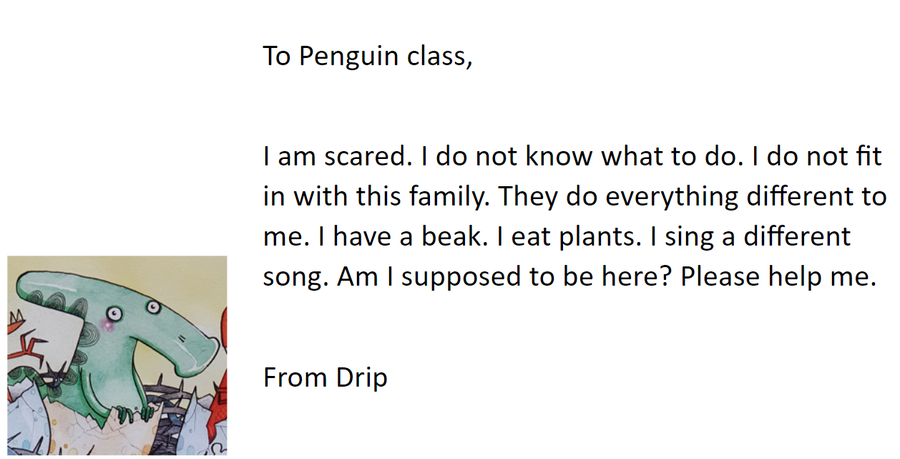 Penguin class recieved a message from Drip and we want to learn it by heart so we can write a message back. To help us remember, we have created a class story map. Each picture represents one sentence of the message. We are learning to chant when looking at the picture and beginning to put actions to these too.

Maths - how many left?

The children have been working with their partner to develop their counting skills and understanding of totals. They counted 10 cubes, and their partner gave them a number to make and then count how many were left. The children would take that many away to see what was left. Some children were noticing the pattern between this and subtraction.

Today, the children were learning about their emotions. We use Zones of Regulation at Eynsham to help children identify how they are feeling by describing it in colours. The green zone means go - they are ready to learn. The blue zone means they may feel sad or tired. The yellow zone means they feel silly or are starting to loose concentration. The red zone means they feel angry. The children drew pictures to represent how they feel or experiences they have had being in that colour zone. We discussed ways to help us get back to the green zone such as taking deep breaths, movement and brain breaks, talking to someone about it.

Today we started our new book Tyrannosaurus Drip. We received a special message from the main character in the story, saying that he’d left messages for us in the Marsh asking for help. We went to the Marsh and looked for the messages so we could work out how we could help him. We used the clues in the message to predict what we thought the story was about, who the character was and how he was feeling, and why he was feeling that way.

The children have been counting objects by using one-to-one correspondence where they assign one number person object to ensure they don’t miscount. To improve accuracy, children were encouraged to line the objects neatly and touch the object they count. They counted a variety of objects and matched these with its number.

The children were challenged to find objects around the room made from certain materials. They found objects made from plastic, wood, glass, fabric and metal.

The children have used practical equipment to sort objects by colour, size, shape or type of object. They verbalised how they sorted their objects and reasoned their decision by what is the same and what is different about them. Children were challenged to decide their own way of sorting the objects.